Week 8th of June
This week, we are learning about Space 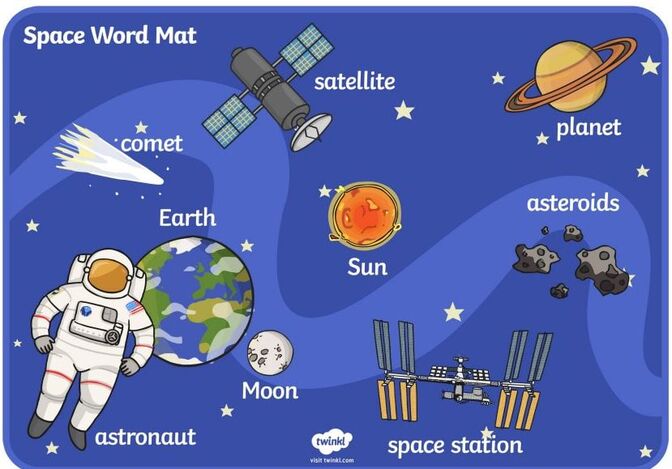 Week 1st of June
This week, we are looking at the theme of outdoor & adventures!
Suggested activities:

1. Go on a hike/long walk in your local area. Draw 3 things that you saw on your walk.
2. Have a picnic outside in the sun. Help prepare some snacks for it!
​3. Scavenger hunt either inside your house or outside (worksheet below)
4. Riddles : From your outdoor activities during the week, see can you work out the missing words in the riddles below!!
Answers to riddles: tree, water, mud, leaves, rock, tracks, flowers, wall, seat, grass

​This week, we are continuing our theme of Pirates!
​Suggested activities for this week:
1. Write a description of a 'wanted pirate'. Include:
-The name of the pirate
​-What the pirate looks like
-How much money is being offered for a reward
​-A picture of the pirate

Pirates used to send messages in bottles. Write a message in a bottle for a friend/family member that you miss. Tell them 2 things that you have done this week.
4. Cosmic Kids Yoga Pirate
Week 18th of May
​
Here are some suggested activities below:

1. What do you know about Pirates? List / draw some of the words you know (ship, flag, Captain Hook, ladder, walk the plank) Here's some of the new words we would have learned. Try your best to read some of them and pick two of your new words and draw a picture of them.

Pirates were people who sailed ships around the world looking for other ships to attack. When they attacked ships, they would try to steal whatever the other ship had, especially treasure. Some pirates had unusual nicknames, such as Blackbeard, Calico Jack and Redbeard. 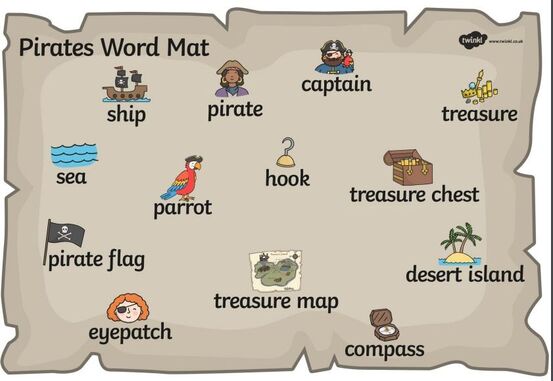 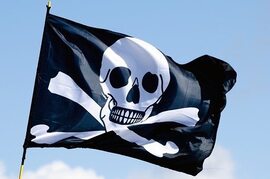 2. This flag is called the Jolly Roger. Lots of pirate ships flew this flag. When other ships saw the Jolly Roger, they knew there was trouble ahead. Your task is to design a flag for your own pirate ship!
3. Talk like a pirate! 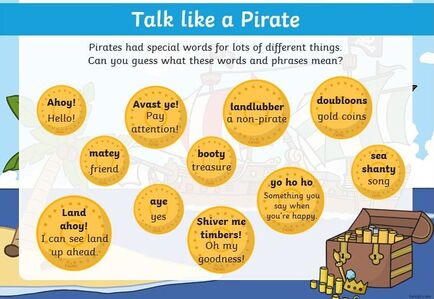 4. Make your own pirate hat! Instructions below! 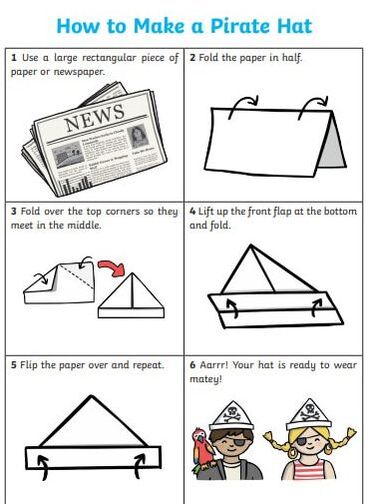 Week 5th of May: This week our theme is the season Summer. Again, you have 4 suggested tasks below (one to be completed each day).

1. Summer vocab - Think of all the words you know that are related to Summer. Say them out loud. Here are some new words that we would have learned in relation to Summer. Ask your mam/dad/minder to read through these words and make sure you know what each one means. Pick 2 of your favourite new words and draw a picture of them.
2. What clothes do we wear in Summer? Below are pictures of clothes. Your task is to sort them into Summer clothes or winter clothes. In your copy / sheet of paper, draw a line down the middle and write the word 'Summer' on one side and 'Winter' on the other. Draw the clothes in the correct season.
3. What can you see at the beach? Look at this picture and talk about some of the things that you can see.
E.g. I see a boy making a sandcastle. I see a boy and his dad swimming in the sea. I see a dog running on the sand. 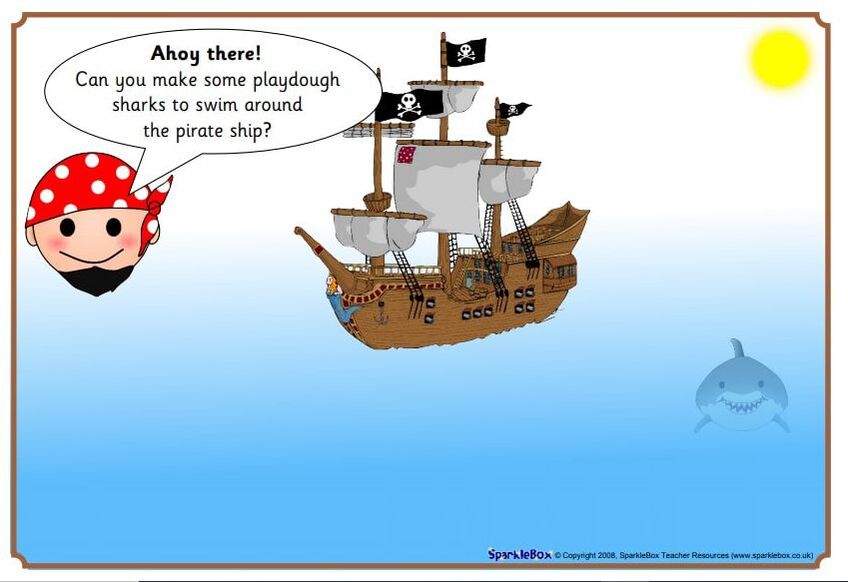 4. This week we have had lovely weather! Draw a picture of your favourite thing to do outside when it is sunny. Write a sentence underneath the picture:
'My favourite thing to do in the sun is __________'. (playing with my family, having a water fight, going to the beach, playing in my treehouse, playing football and so on..) 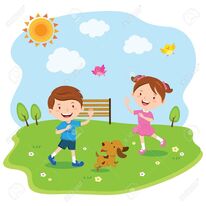 April: People who help us

Week 27th of April  - Continued work on the post office:

This week you have 4 challenges / tasks (one to be completed each day)
2. Watch the video of Aisling's letter and Jack's parcel. Have you ever wondered exactly where your mail goes from the moment it slips into that post box? or when you post a parcel?  Does it hop on a bus or fly on a big airplane?  Discover the exciting journey of your mail and parcels from the post box/post office to your door in the videos below.
3. Read the passage below to your child and ask them the questions.

The Start of Post in Ireland
Ireland’s first postal service started over 350 years ago! At first, only rich people and members of the government used it because it was very expensive. The mail was delivered by mail coach but because the roads were very bumpy and full of potholes, it took a very long time.
In 1840, the first stamp was made and it cost one penny. This wasn’t too expensive, so lots of people could afford to use the postal service. This was really great as it meant people who didn’t have much money could stay in touch with each other.

Questions:
1. When did Ireland's post start?
2. Why did it take a long time?
3. How much did the first stamp cost?

4. Draw a picture of the GPO - General Post Office - The GPO is An Post’s largest Post Office and is situated right in the middle of Dublin city on O’Connell Street. It is a beautiful old building that played a big part in Ireland’s colourful history. It is also the headquarters of An Post. 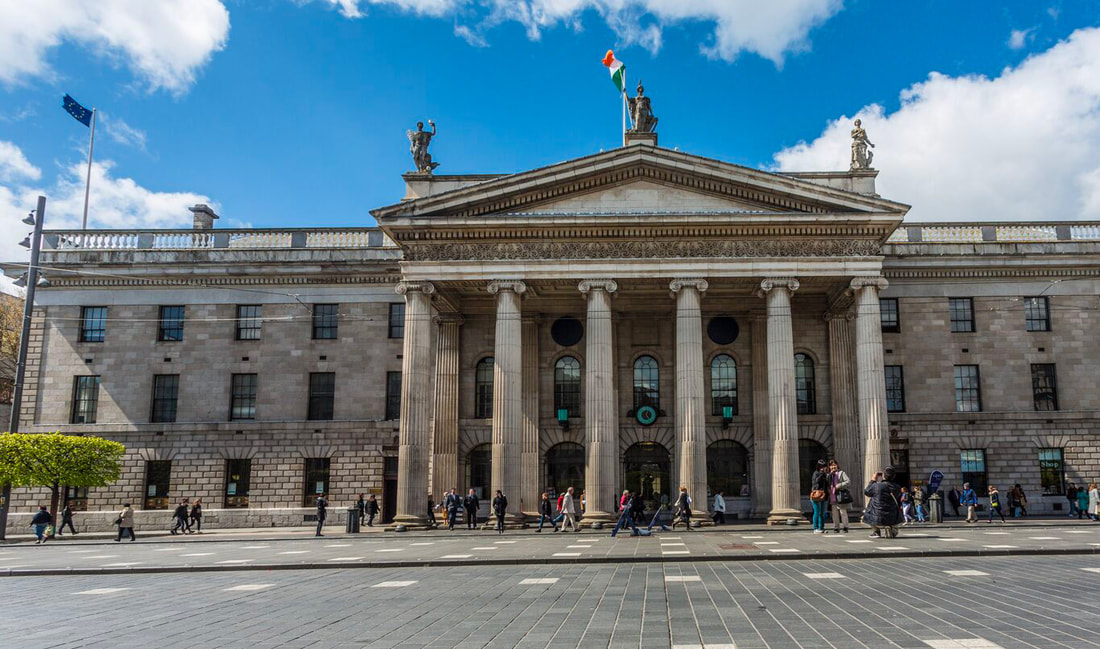 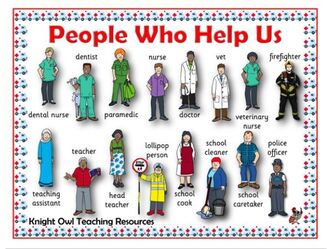 Few activities to get started:
​

March: The Lifecycle of the Chicken

​This month in Science we were going to explore the lifecycle of the chicken.


Have a look at the power point below that explains the different stages of the life cycle:

A few years ago Ms Byrne had chickens hatching in her classroom....maybe some of your brothers and sisters in 3rd class might remember and be able to tell you about it. 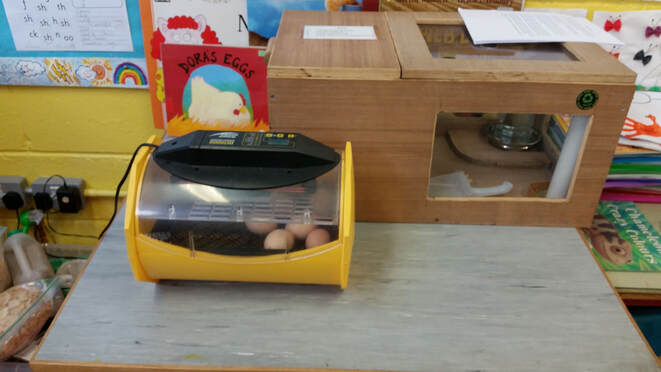 We had an incubator and a hutch.

We used the incubator to keep the eggs warm as the hen stayed on the farm with the farmer. The chicks were able to hatch from the egg all by themselves using a special tooth. When the chicks hatched they stayed in the incubator for two days so their skin could dry out and become fluffy! While they were in the incubator they continued to get their food from the egg shells.
We were so excited when the eggs started to hatch.....although it took a long time for the chick to emerge from the egg.
After two days the chicks could move into the hutch! It was then our job to look after them.
Everyday we had to;

​We even made some Art for them to show the lifecycle of the Chicken. 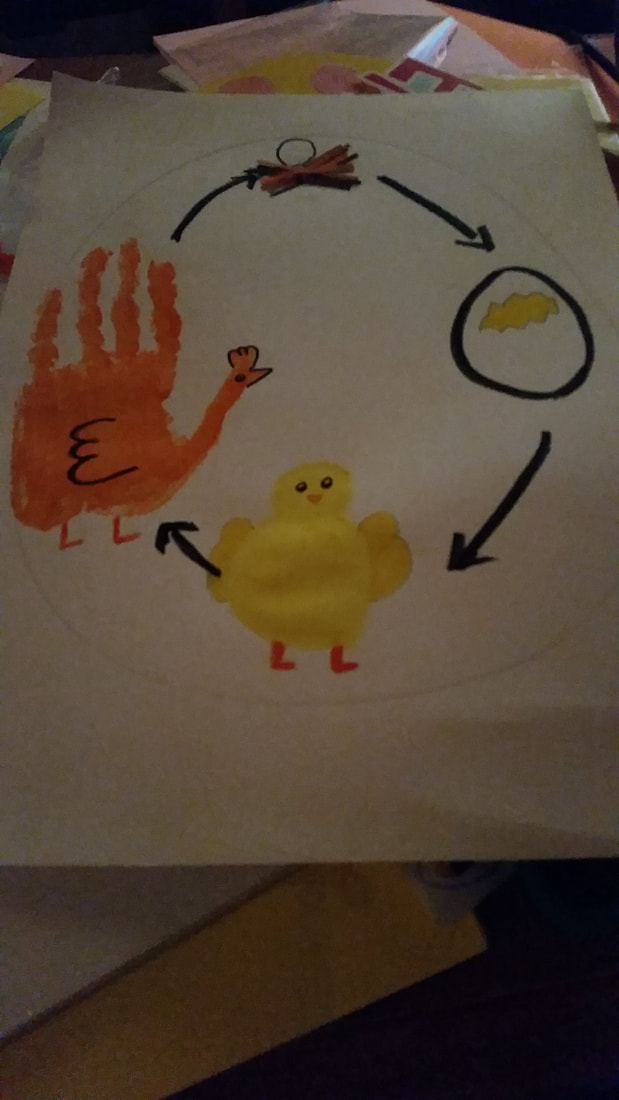